What Your Business Can Learn From Adrian Beltre's Historic 3,000th Hit 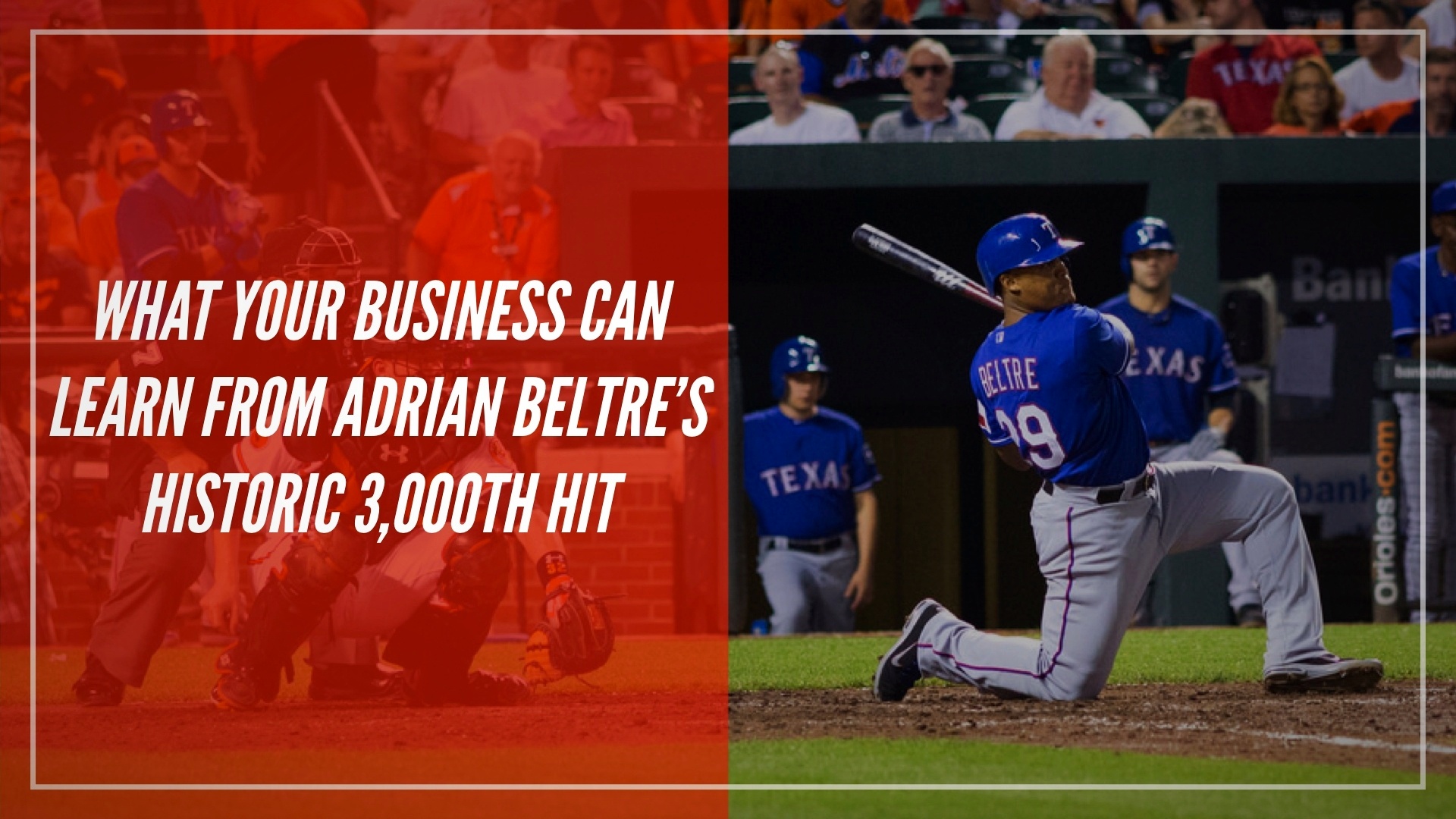 Some of our digital department made the quest to Arlington on Sunday for a chance to witness history, Adrian Beltre's 3,000th career hit. If you aren't a baseball fan, 3,000 career hits is a milestone that almost guarantees your future induction into the Hall of Fame. Major League Baseball (MLB) was founded in 1869, and you can find stats dating all the way back to 1871. Beltre, 146 whole years after the commencement of stat keeping, became only the 31st player to reach 3,000 hits.

As I've had some time to digest the history we experienced, I began thinking about what Beltre's journey must have been like. From his debut as a teenager in 1998 to his historic hit 19 years later, he's been the model of a consistent baseball player.

And then, because I'm a marketer and not a professional baseball player, I began trying to make comparisons between Beltre's career and what it takes to be a historical marketer. And guess what, I came up with some applicable marketing lessons that can be learned from Beltre's journey to 3,000.

The following lessons aren't me reaching so I can write about baseball. Instead, they're taken straight from what I know about baseball and what I witnessed Adrian Beltre do throughout his career. It just so happens that they're also quite relevant for your business.

With that being said, here are 5 things your business you can learn from Adrian Beltre's 3,000 hits.

On his way to 3,000, Beltre essentially did the same thing for almost two decades before finally reaching the prestigious milestone. He played 2,771 games over the span of 19 years before his historic day. I know, his paycheck and career are probably a pretty good incentive to be patient, but history requires patience nonetheless.

Maybe your business isn't taking off like you thought it would. Maybe your marketing doesn't seem to be effective. Before giving up, try being patient. Eventually, if you're using good marketing strategies, your content will build upon itself and those results will start creeping in. In order to see those results, though, sometimes you have to keep impatience from slamming the door on your campaigns.

We have a lyric from Macklemore's song, Ten Thousand Hours, written on a whiteboard in our office that says, "The greats weren't great because at birth they could paint. The greats were great 'cause they paint a lot." The whole song is based on Macolm Gladwell's book, Outliers, in which Gladwell consistently talks about the 10,000-hour rule, a general rule for how much practice it takes to become world-class at a particular skill, and how it relates to the success of well-known figures in the world, who he calls outliers. Ten thousand hours may seem like an eternity, but any amount of consistent practice is going to be beneficial, even if you don't attain the prescribed amount of hours.

Adrian Beltre, like all baseball players, has failed. Baseball, in a lot of ways, is a funny game. Failing seven out of ten times is considered a great success on offense. Within a season of at bats, every player experiences both hot and cold streaks. Every player experiences a moment where they fail in a clutch situation. One hundred and sixty-two games is a long season, so you are going to fail at some point. You might have just finished a week where you batted .578 and the next day can start a streak where you go 0 for the next 20.

Failure is going to happen. It happens to people who are the best in their fields. But failure has a way to make you better. If you aren't doing, then you aren't failing; and if you aren't failing, you aren't advancing your skill set from learning from your failures. Don't be scared to try something because you fear failure might occur. Baseball wouldn't even be a game if every baseball player feared failure to the point of not trying.

4. Do whatever it takes

Adrian Beltre is an absolute grinder. His pain tolerance is out of this world. He has battled injuries most of his career, but he usually plays through the pain.

Maybe he just sees a job that needs to be done and does whatever he can to ensure the job gets completed. Are you resilient in that manner? Don't quit if something gets in your way, find a way around it.

5. Enjoy what you're doing

And almost most importantly, Adrian Beltre never ceases to have fun on the baseball field. The reason he's one of the most enjoyable players to watch play the game is because the amount of joy he plays the game with.

It's okay to have fun. People enjoy personality. People like to see that you're human. Personality draws people in. There's something contagious about witnessing someone enjoy what they're doing, just like watching a veteran, future Hall of Famer run around a baseball diamond with the enthusiasm of a child.

Now that's a guy who loves his job.

Remember these lessons and make history!

If you want more advice on how to build a historic business, download our FREE ebook by clicking below!