How to Keep Your Long-Term Goals From Failing

Logan and I have started a new post-work routine to unwind from the day, playing FIFA. Yes, if you come to our office, the Xbox on our desk might bring into question our diligence during the workday. I can assure you, though, there's no temptation to play while we're working during the day.

To someone from the outside, it might seem like there's nothing on the line while we're playing. That conclusion would be wrong. You see, we're both hyper-competitive people; we've been that way since we met each other about 23 years ago. For 23 years we've been keeping tallies, whether in the back of our minds or verbally, of head-to-head wins and losses. We have an innate ability to turn anything we do into some sort of competition: basketball, baseball, paper football, throwing rocks, scooter tricks, etc.

So, naturally, we're keeping a tally of wins and losses in our FIFA games.

For some reason, we also have two championship belts in our office, albeit toy ones. The fact that Aaron purchased and wore one for his phenomenal costume inspired by Chris Farley's El Niño character a couple years ago doesn't matter. The belt still holds weight. The bearer of it is the marked champion of the most recent competitive endeavor.

Last night I was wearing both belts. 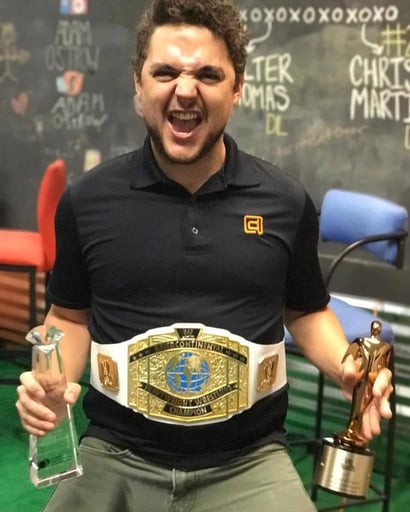 Why does all this matter? Because though I'm up by three games, I was up by six games at one point last night. Why does that matter? Because though the long-term goal is to be the lifetime FIFA head-to-head champ, Logan cut into the chances of me seeing the culmination of the long-term goal by going on a win streak and chipping away with his short-term goal, winning one match at a time.

The short lesson I learned from FIFA and watching my lead plummet to just two games at one point is this: without attainable short-term goals, your long-term goal is vulnerable.

This is true for your business. What are your goals? Do you have goals for this week, this quarter, and this year that can build on each other to help move you toward your main goal? Do you have a long-term goal that you can create strategies around? Both of these are essential elements for the growth of your business.

If you need help creating goals, we have a free resource for you. Our SMART goals guide will walk you through how to formulate goals that are specific, measurable, attainable, relevant, and time based (hence the acronym SMART). You'll also receive a free worksheet that you can use to put your goals and strategies on paper.

Merely focusing on the long-term only pushes it further away. You need steps to focus on along the way that create a clear path toward the pinnacle.

*Note:  Though it might seem like part of our lives revolve around playing FIFA, that's not the case. Portions of this may be dramatized for effect.